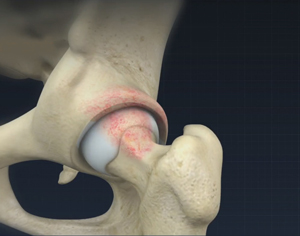 What is Femoral Osteoplasty?

Osteoplasty is a surgery performed to repair and redesign a bone to its original shape. The surgery is used to treat bone deformation in various joints of the body.

Femoral osteoplasty is the surgical alteration or reshaping of your femur (thigh bone). It is performed if you have an abnormally shaped femoral head or neck leading to a medical condition called femoroacetabular impingement (FAI), the most common cause of hip pain.

Your hip is a ball and socket joint where the ball-like top of the thigh bone (femoral head) fits into a cup-like socket (acetabulum) in such a way that the ball can move smoothly within the socket.

Sometimes, an extra bone grows on the ball of the joint giving it an irregular shape. This bony growth (bone spur) on the ball is called a cam lesion. When this occurs, the ball is no longer a smooth spherical shape, resulting in the ball bumping into the socket when you bend, turn or move.

Young adults are at greater risk of FAI.

Over time, repetitive bumping or impingement of the ball on the socket leads to the damage and deterioration of the cartilage covering the ends of the bones in the joint. This causes painful rubbing and restricts the free movement of the ball within the socket.

The condition eventually leads to stiffness in the hip joint, and unbearable pain during regular activities and limping.

Femoral osteoplasty can correct the irregularity of the ball shape, eliminate the pain, improve the range of motion and restore normal function to the hip joint.

Initially, the doctor will recommend simple and non-operative measures such as rest, physical therapy, anti-inflammatory medications or certain types of injections to treat the condition. If they do not show adequate results, femoral osteoplasty is considered.

There are two types of osteoplasty.

However, the type of osteoplasty depends on the severity and location of the abnormality.

During the arthroscopic osteoplasty:

If the condition is more severe or in an area that cannot be reached by arthroscopy, your doctor will opt for open osteoplasty.

After the surgery, you will be advised to follow an individualized rehabilitation procedure until you fully recover.